The store will not work correctly in the case when cookies are disabled.

The nationally-known dealer, who spends just as many weekends attending regional and national coin shows as he gets to spend at home, once put a million of his own dollars into building a world-class Morgan dollar collection only to discover that it takes a lot more than $1 million to earn a top spot on the PCGS Set Registry.

“At the time I sold my set through Superior, it was ranked #10. This was 10 years ago,”Shapiro told CoinWeek. “I couldn’t get any higher. I had spent my maximum amount of money for that set – $1 million… and frankly, it was so much of my net worth that I couldn’t justify keeping it. Besides, I had accomplished my goal of completing the set, so it was time to let it go.”

In a competitive Set Registry landscape, Shapiro’s decision to drop out caught the attention of several members of the PCGS forum.

“Some of the guys online teased me for selling, suggesting that I couldn’t keep up with the big boys. Well, yeah, that’s true. Then, just as today, most of the top guys are multi-millionaires or better,” Shapiro told us.

“I tell people, the Set Registry is not a skill contest. It’s about who has the most money and being at the right place at the right time. I had reached the upper limit of what I could do. The guys ahead of me were two million dollars ahead.”

Selling his Morgans didn’t dampen Shapiro’s taste for high-end coins, however, and to this day he remains an avid collector, having built more than 90 registry sets. Shapiro’s sets have earned him 16 PCGS Set Registry Awards going into 2015.

Still, he stands in awe of the Coronet Collection and what that collector accomplished. Going into Legend Rare Coin Auction’s public offering of the first half of that set, Shapiro was once again engaged in buying the best Morgan dollars that money can buy–but this time, it wasn’t for himself.

“A client that I am working with wants to put together a top end set, and who knows… one day his set could rival Coronet. Going into this sale, however, he budgeted me with $700,000 to begin the process of putting it together.”

Whatever the configuration of Shapiro’s collector’s set turns out to be, it’s likely to include pieces not in the Coronet Collection.

“Most of the Coronet coins were fantastic. But obviously, there’s room for improvement, and I’m sure one day someone will top that set.”

“But to do that, obviously, you will need several coins from Coronet.”

The coins Shapiro is referring to are several top pop, pop 1 “finest known” pieces. It was the inclusion of these pieces that aided the Coronet Collection’s All Time rank thanks to PCGS new weighted points system that gives bonuses for such pieces. 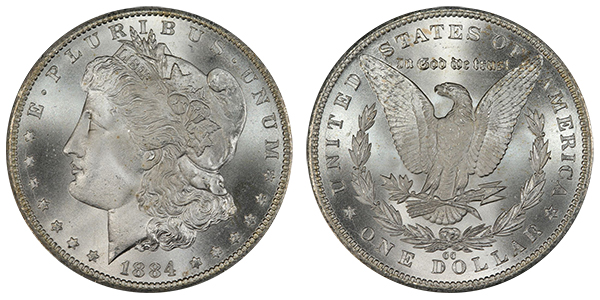 The new formula also drives the need for collectors to keep working on their sets, driving up the prices of top end coins and requiring competitive collectors and their dealer agents to keep abreast of population shifts in the marketplace.

As for Coronet I, Shapiro successfully won 18 coins, including a number of MS68 and MS68+ Morgan dollars.

That coin was featured in CoinWeek’s preview of the sale. You can read our remarks by clicking here.

Shapiro also picked up for his collector the Coronet 1881-CC in MS68 and the 1881-O in MS66+. No finer coin of either issue is recorded.
On October 15, 2015, Legend Rare Coin Auctions will offer the second half of the Coronet Collection. Shapiro and his collector are already working on a game plan and picking out the coins that they will go after for their set.